Whilst prokaryotes have only one RNA polymerase, eukaryotes (including human beings) have three enzymes which can synthesise RNA. They are large enzyme complexes composed of several protein chains. They all have sites which can recognise and attach to certainDNAsequences, recruit the necessary nucleotides to extend the chain, and catalyse the formation of the nuclear bond (phosphodiester bond).

Bacterial and Archaeal RNA polymerase can synthesise all of the cell's RNA. On the other hand, the different eukaryotic RNA polymerases have quite distinct roles.

Other RNA polymerases (IV and V) are currently being studied and appear to be involved in the RNA interference mechanism. 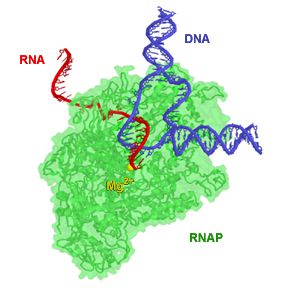