A ribosome is an enormous ribonucleoprotein complex which translates mRNA into proteins.

Structure of the ribosome

The ribosome is a complex composed of RNA and ribosomal proteins bound to a membrane (in the granular endoplasmic reticulum) or free in the cytoplasm. The ribosome is common to all cells (prokaryotes and eukaryotes) and its composition particularly varies depending on the organisms although it is always composed of two different sub-units.

Prokaryotes have a 70S ribosome (where S represents the Sverdberg sedimentation unit) composed of sub-units 50S and 30S. Three ribosomal RNAs are present in its structure (23S, 16S and 5S) together with 55 proteins.

Function of the ribosome

The ribosome translates nucleotide triplets (a codon) carried by the mRNA into amino acids. This is possible through the involvement of interpreting molecules, the transfer RNA (tRNA). They carry two types of essential information: an anticodon which represents the mRNA codon and a corresponding amino acid Each codon is therefore translated into one of the twenty existing amino acids and the codon chain leads to an amino acid chain i.e. a protein. 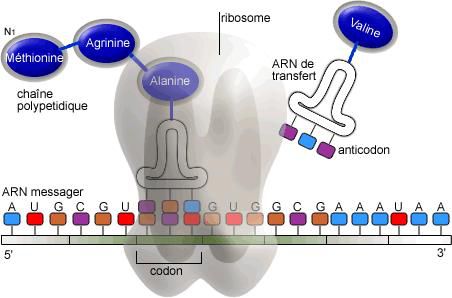 Translation of proteins is a process which takes place in the ribosomes. © Guillaume Bokiau, Wikimedia, Licence GFDL