The prostate is part of the male reproductive system.

Function of the prostate

The prostate contributes to production of semen by secreting prostatic fluid. Prostatic fluid (which makes up 20% of the volume of semen) is colourless, isotonic, and contains calcium, proteins, zinc, citric acid, and acid phosphatase. Zinc plays a fundamental role in the ability of the spermatozoa to fertilise, and is extracted from the circulating blood by the prostate.

Structure of the prostate

The prostate is an organ located immediately beneath the bladder. It is a fibromuscular glandular organ which is shaped like a chestnut and has a woody consistency. The prostate increases in size at puberty due to androgenic hormones and in adulthood measures approximately 2 by 3 centimetres, and weighs approximately 20 grams.

Passing through the prostate are the ejaculatory ducts and the urethra. It is therefore an organ which is a true crossroads between the urinary and genital tract.

The prostate is divided into several zones, the most important of which are the transition zones (where benign prostatic hyperplasia develops) and the peripheral zone (where cancer develops). 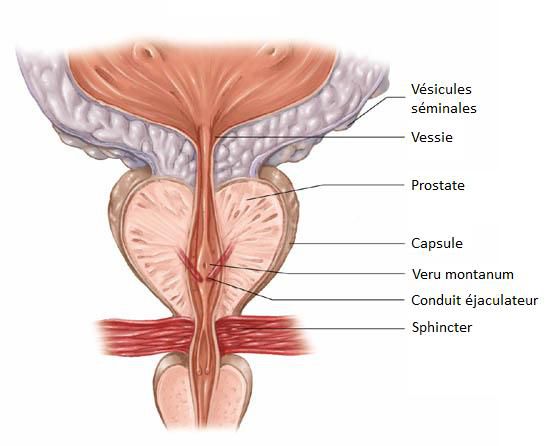 The prostate contributes to production of semen by secreting prostatic fluid. DR Credits