The pharynx is a crossroads between the respiratory and digestive tracts.

Function of the pharynx

The pharynx is located at the back of the buccal cavity and is a muscular-membranous conduit involved in the digestive system, respiratory system, hearing and phonation.

The pharynx contains several muscles that provide the swallowing mechanism. The respiratory tract openings are obstructed temporarily to promote food passing from the mouth into the oesophagus and avoiding what is known as aspiration (swallowing the wrong way).

In addition to its digestive function, the pharynx has a respiratory role as it enables air to pass into the larynx.

The pharynx is also involved in phonation by changing the sounds produced in the larynx by the vocal cords. The opening of the Eustachian tube is also located in the pharynx and connected to the inner ear.

Structure of the pharynx

The pharynx can be sub-divided into three parts (from upper to lower) :

Each part has a respective opening into the nasal cavity, into the buccal cavity and to the larynx.

The pharynx from the lumen outwards is composed of: 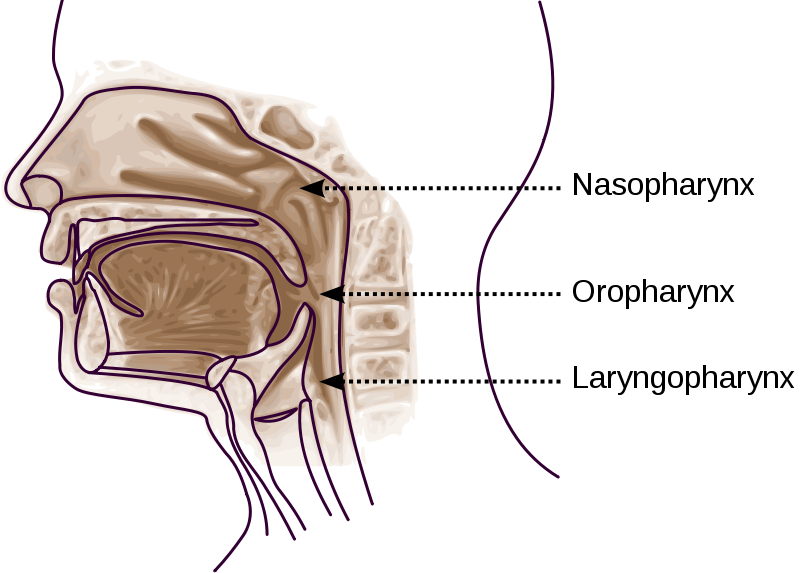 The three parts of the pharynx: the nasopharynx, the oropharynx and the laryngopharynx. © Sémhur / Licence Creative Commons