The penis is part of the male reproductive and urinary systems.

Function of the penis

The penis has two major functions:

When sexual excitement occurs, the penis hardens and becomes erect as a result of a large amount of blood entering the erectile tissue. This is an erection. In order for the man to be able to have sexual intercourse and penetrate the vagina, the penis must be erect.

Structure of the penis

The penis is an external organ composed of the glans at its tip, and the shaft. Its tip is cone-shaped and has a small opening through which urine and semen, pass after passing through the urethra. The glans is covered by a protective skin called the prepuce. The shaft, which begins at the base of the penis, is cylindrical.

The unexcited penis is soft and hangs between the legs. It contains richly innervated erectile tissue composed of two corpora cavernosa and a corpus spongiosum. Boys begin to have reflex erections from birth. Reflex erections may occur in adolescents and adults on walking in the morning.

The size of the penis is of no importance in a couple's sexual satisfaction. The walls of the vagina can adapt to the shape and size of any male organ. 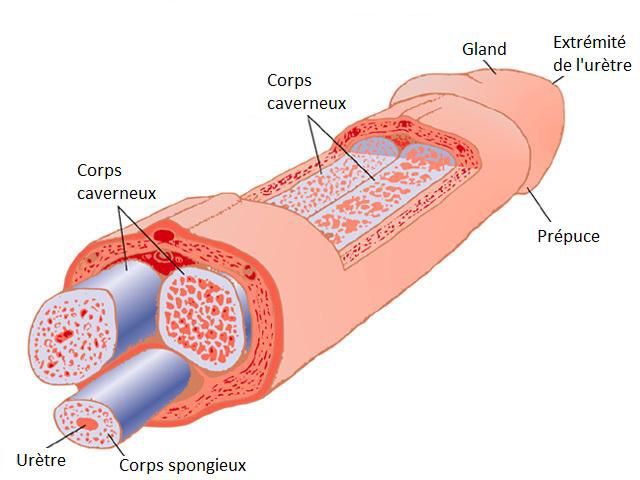 Together with the testes, the penis forms the external reproductive system in men. DR Credits