The oesophagus is part of the digestive system.

The function of the oesophagus is to pass food which has been chewed in the mouth down towards the stomach where digestion continues. The oesophagus carries foods actively via contraction of its muscles, a phenomenon called " peristalsis". It has a sphincter at its upper end which prevents reflux of food. It does not have the sphincter at its lower end (the cardia of the stomach folds forming a barrier against reflux, a type of functional sphincter).

The oesophagus is located between the pharynx and cardia of thestomachand is a tubular thoracic organ measuring approximately 25 centimetres long and 2 to 2.5 centimetres in diameter.

It has three narrowings :

Theoesophagus is composed of several layers, from outside inwards : 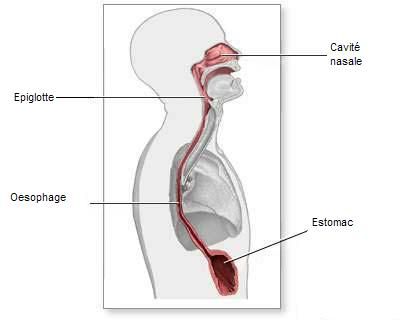 The oesophagus is part of the digestive system and contributes to the movement of food. © DR