A neurone is a nervous system cell specialising in communication and information processing.

Each neurone is composed of:

Axons and dendrites from different neurones come into contact and communicate information between cells through specialist structures called synapses.

The role of the neurones is to circulate information between the environment and the body, or within the body.

A neurone is an excitable cell, i.e. a stimulus may lead to the formation of a biolectrical signal or neuronal impulse in the cell, that can be transmitted to other neurones or other tissues in order to activate them (muscles, secretory glands etc.).

There are 100 billion neurones in the human brain which can therefore create an incredibly complex network, with more than 100,000 synapses per neurone at times. 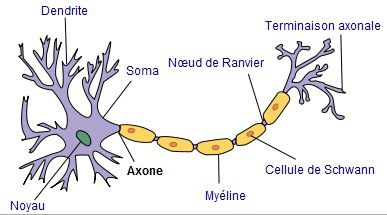