Mimiviruses are the first genus of giant viruses in the world to be discovered.

The Mimiviruses are as large as some bacteria and have taken their name from the English Mimicking microbe virus.

They were discovered in the 1990s although they were first confused with bacteria. Their identification as being a distinct virus was achieved by a Marseilles team in 2003, in a publication in the journal Science. 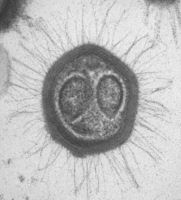