The larynx belongs to the respiratory system.

Function of the larynx

The larynx is an organ located in the throat between the pharynx and trachea. Its main role is to allow air to pass into the lungs during inspiration or to the exterior during expiration.

It also contains a membrane which closes automatically when food passes from the pharynx into the oesophagus during swallowing, thus preventing foods from reaching the respiratory tract (for example, the trachea).

The larynx also plays an important role in speech. It contains the vocal cords and muscles that change the opening of the lumen of the larynx consequently changing the sounds that are produced.

Structure of the larynx

The larynx is an osteo-cartilaginous conduit which is divided into three parts:

The different cartilages (thyroid, cricoid, arytenoid, epiglottis) are connected by ligaments and form the outline which is known as the Adam's apple. The cartilages are covered by laryngeal muscles, which allow the larynx to move, and by a mucosa, which is similar to the mucosa in the trachea. 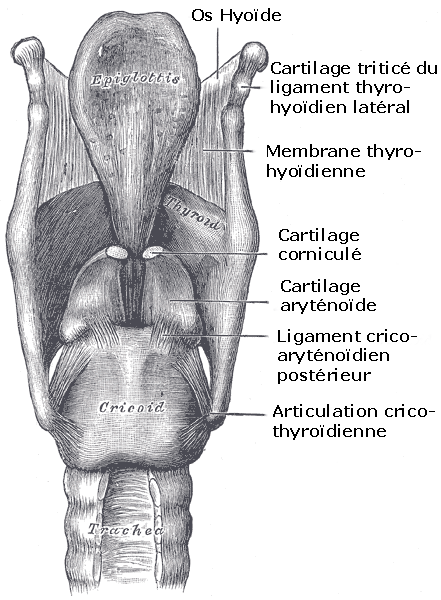 The larynx is a cartilaginous structure which opens into the respiratory system. © Wikimedia Commons