The jejunum is part of the digestive system.

Function of the jejunum

The jejunum is part of the small intestine lying between the duodenum and the ileum. It transports foods being digested quickly to the ileum by peristaltic waves produced by muscles in its wall. It can absorb nutrients through its mucosa that has villi and microvilli that increase the overall surface area of the wall. It has a pH of between approximately 7 and 8.

Structure of the jejunum

The jejunum is approximately 2 metres long and has a diameter of 2 to 4 centimetres. It is vascularised from the superior mesenteric artery and the smooth muscles are controlled by the autonomic nervous system. 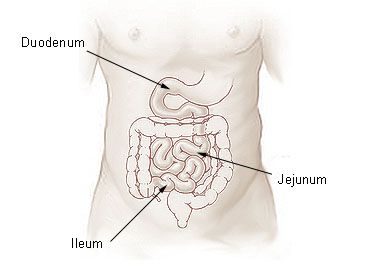 The jejunum is one of the three parts of the small intestine. © DR