A Bunsen burner is a laboratory instrument which produces a flame. Despite its name, it was not invented by the chemist Robert Bunsen, but by one of his assistants, Peter Desdega (who had, in fact, perfected an invention by Michael Faraday).

Principle of the Bunsen burner

The Bunsen burner has the form of a chimney with a side input connector for inflammable gas. A collar is used to vary the intake of air from side openings in order to adjust the intensity and heat of the flame. Four types of flames can be distinguished:

Use of the Bunsen burner

The Bunsen burner is widely used in chemistry and biology laboratories.

It is used in chemistry to heat preparations in a test tube.

It is particularly used in biology to sterilise instruments (by passing them into the flame) and the air within a radius of 20 centimetres around the flame (essential for microbiology experiments). 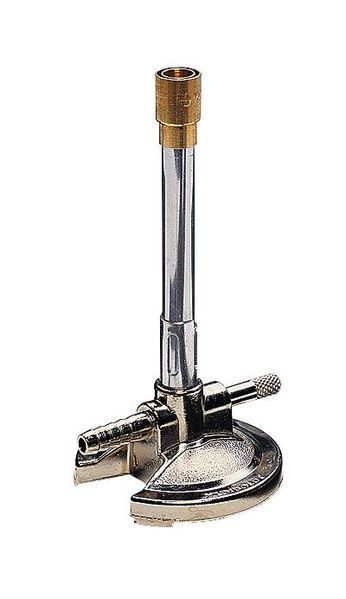 The Bunsen burner was invented in 1855 by Peter Desdega. © Nasa, Wikipedia, public domain