X-15 was a research programme begun in 1952 by NACA (the predecessor of NASA) to explore hypersonic flight, between Mach 4 and Mach 10, and very high altitude flight. Its purpose was to develop a prototype aircraft capable of reaching low orbit and returning to Earth by its own means. The constructor North American won the contract and built the first aircraft in 1958. The first flight (unpowered) was on 8 June 1959. Three of the aircraft were built. The programme came to an end on 24 October 1968.

The X-15 was 15.45 metres long and had a wingspan of only 6.8 metres. In its initial version it weighed 6,620 kg unladen and 15,420 kg with maximum load. Two fuel tanks carried up to eight tonnes of fuel (anhydrous ammonia) and oxidiser (liquid oxygen). At a rate of 4,500 kilogrammes per minute, the XLR99 rocket engines built by Reaction Motors, a division of the Thiokol Chemical Company, consumed the fuel in 80 to 90 seconds, delivering a thrust of 26,000 kilogrammes. Its fuselage was made of alloys, including inconel, which had to withstand temperatures of over 800°C.

The aircraft could not take off by itself, and was carried fixed under the right wing of a B-52 bomber, which released it at around 13,500 metres altitude. The XLR99 was then fired and the X-15 began its ascent. At altitudes where the pressure is too low to use normal aerodynamic controls, the pilot fired 12 small rockets running on hydrogen peroxide.

Flights took place over United States territory, with very wide turns imposed by the speed. The aircraft glided down and landed on retractable skids, touchdown occurring at around 200 knots (360 kilometres/hour, 225 mph) on a salt lake near the Edwards air base in the Mojave desert.

During the ten years the X-15 programme lasted, thirteen flights exceeded 80 kilometres in altitude (50 miles), the boundary of space for the US Air Force, and twice, an X-15 exceeded 100 kilometres, the official threshold today. On 22 August 1963, Joe Walker took the X15 up to 107,960 metres. On 17 October 1967, Pete Knight reached Mach 6.7, or 7,273 km/h (the fuselage temperature rose to 1,300°C, and the X-15A2 returned damaged; in spite of repairs, it did not fly again). Apart from the space shuttle, these two records still stand today for a winged aircraft.

Twelve pilots (including Neil Armstrong) took part in the programme. One of them, Michael Adams, died in X-15 flight 3 on 15 November 1967. Eight of those who flew above 80 kilometres are considered by the US Air Force to be astronauts. Joe Walker twice exceeded an altitude of 100 kilometres and so received the official title of astronaut.

Enormous amounts of data were gathered on these hypersonic and space flights which were widely used in the space shuttle development programme. 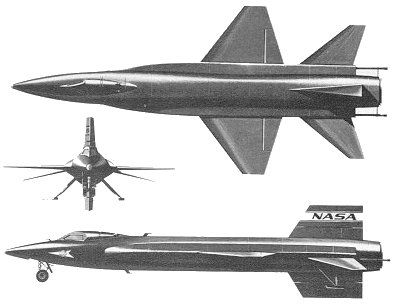 Drawings of the first version of the X-15. Note the short wingspan (6.8 metres for a fuselage length of 15.45 metres) and the imposing size of the tailplane, the lower part of which is ejected before landing. The main landing gear had no wheels and the X-15 landed on skids which can be seen on the front and side views. © NASA