Sputnik 1 was the first artificial satellite launched from Earth.

It was launched on 4 October 1957 from the Tyuratam base in the URSS, and was made of a highly polished AMG6T aluminium sphere 2 mm thick and 58 cm in diameter. Its four antennas were arranged at an angle of 35° and transmitted a 0.4 second 1 watt pulsed signal on two frequencies of 20.005 and 40.002 MHz, produced by a valve transmitter powered by a silver-zinc battery. Thermal regulation was provided by a pressurised atmosphere circulated by a fan. 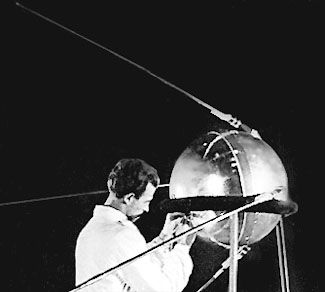 The actual Sputnik 1 being checked on the ground. Russian archives.