Used for the inauguration of Starsem commercial operations, Soyuz-Ikar has carried out all its missions to place groups of satellites for Globalstar, a mobile telecommunications operator, into orbit.

Soyuz-Ikar uses the basic Soyuz launcher which is composed of:

Liquid oxygen and kerosene are used as fuel for the basic Soyuz launcher.

Originally developed to satisfy the demand for national defence, the Soyuz launcher is a very reliable vehicle that is regularly used for space missions.

The fourth Ikar stage is added to the basic launcher. This is an upper stage that can be reignited in flight up to 50 times. Ikar runs on UDMH/N204 fuel, and can be controlled from the ground or operate in autonomous mode. Ikar is perfectly suitable for the deployment of multiple payloads. 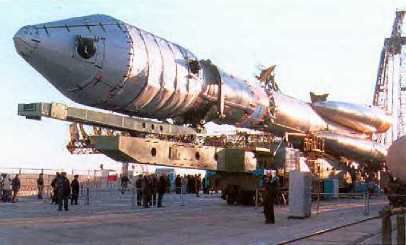 The Soyuz-Ikar launcher with a Globalstar satellite in its fairing. © DR