Skylab was the first American space station. It stayed in orbit around the Earth from May 1973 until July 1979.

The station was built with parts from the Apollo programme: the last three lunar missions having been cancelled after Apollo 17.Skylab is an assembly of the third stage of the Saturn V rocket and the Apollo command module, the whole weighing about a hundred tonnes.

It was placed at an altitude of 430 kilometres on 14 May 1973 and housed three missions in May, July and November of that same year. Nine astronauts in orbit for several weeks took 180,000 solar photos, 46,000 photos of the Earth and observed the Kohoutek comet for a total of 171 days during the station's occupation. These missions were also the opportunity to carry out the first studies on human behaviour in a state of weightlessness for medium length durations, and to carry out 10 space walks totalling 42 hours.

The station was subsequently abandoned because of funding problems and disintegrated in the atmosphere six years later above Australia, where much debris fell. 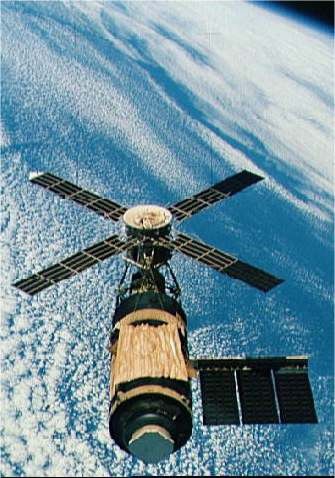